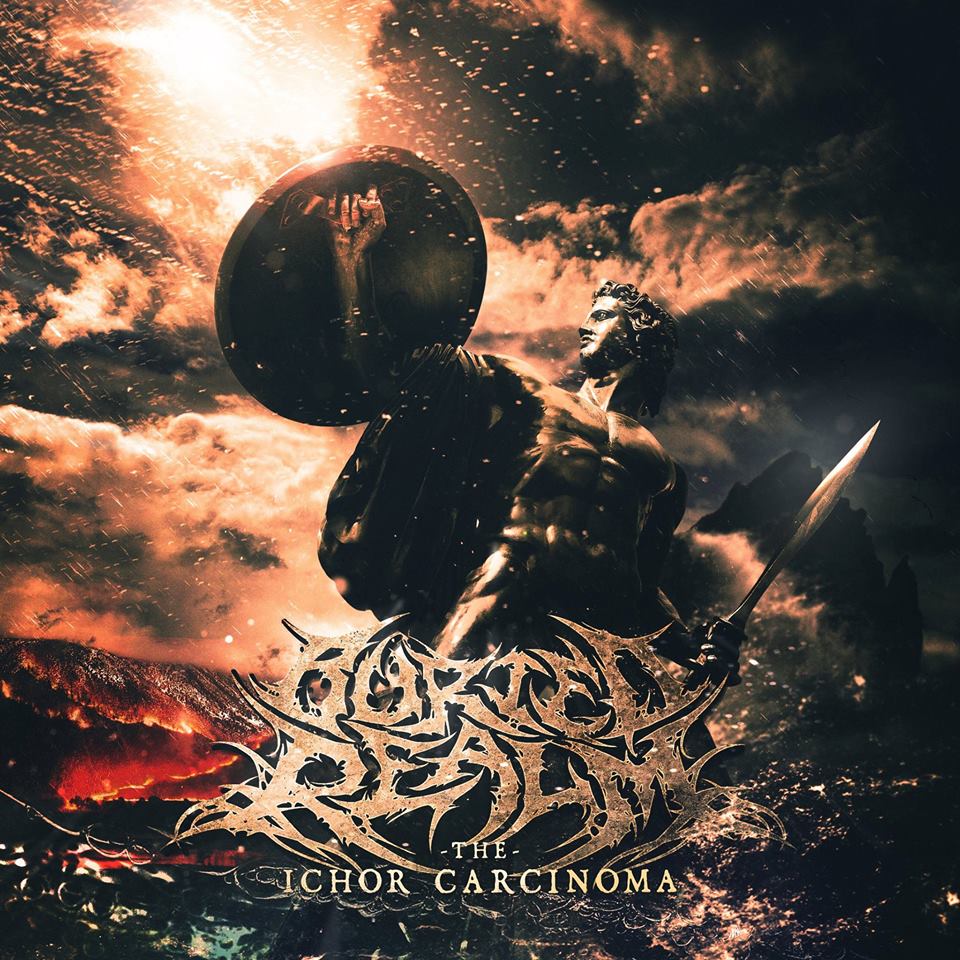 Buried Realm is a one-man project, the work and vision of Josh Dummer, a multi-instrumentalist and thoroughly ambitious chap. I suggest that he is ambitious for three reasons: firstly because of the musical path he has taken on what is his debut album. Secondly, unless I am mistaken, Dummer is responsible for everything, from the lyrics, to the vocals and to the execution of all the instruments on the record. And thirdly, because of the vast array of guest musicians that he has successfully invited to join his cause, however briefly.

I will readily admit that, for once, I succumbed to the accompanying press release when considering whether to venture further with this record. The email heading suggested Buried Realm would appeal to fans of Soilwork, Symphony X, Dissection, Kreator and Carcass, with the body of the email reiterating the bold claim. Hyperbole? I certainly thought so. However, being a huge fan of all of the aforementioned, I was sucked in and found myself taking a listen. And do you know what? The hyperbole has turned out, certainly in part, to be surprisingly accurate.

I’m not certain that I hear many overt Symphony X influences within ‘The Ichor Carcinoma’ or even Kreator for that matter. But as for the rest, I’d admit to their presence, albeit some more than others. And, in addition, I’d add a few more names to the list including Scar Symmetry and mid-era In Flames to name just two.

In short, this first effort from Dummer under the Buried Realm moniker is not the most original of releases; it’ll not have you agog with originality. However, there is no denying the quality that Dummer and friends possess. ‘The Ichor Carcinoma’ is a hugely enjoyable record and is very likely to end up being my favourite melodic death metal album of 2017. OK, so many of the big hitters have been silent this year, but I still don’t bestow this accolade lightly.

I think the thing that ignites my enthusiasm so much about this disc is the way in which it does exactly what a melodeath record should – it is heavy, intense and memorable. Many of you reading this will probably be thinking I’m spouting the obvious, but so often these days, at least one of these elements is missing or, simply the band has moved away from the core principles of the genre. Not Buried Realm though. Indeed, you can also add technical and exuberant to the list of adjectives that apply.

‘The Ichor Carcinoma’ is one of those albums that flies by in an electrifying flurry of heavy riffs, fast-paced leads and an impressive amount of complex dexterity. Mind you, given the abilities of Dummer himself alongside the vast array of six-string guests, is this any wonder? Take the title track as the ideal example. In keeping with much of the record, it is a track that never settles and never sits still. The guitar work is superb, calling to mind the technicality of Scar Symmetry amongst others. Be it heavy groove-laden riffs or more expressive lead work, it’s all present and correct, backed up by plenty of energetic blast beats and striking synths which also trade breathless leads with the guitar at points. On top, Dummer then offers both a deep and evil-sounding growl, as well as a more caustic and venomous scream, more akin to the world of black metal. Both work well and help to create an engrossing opening act to this debut release.

‘Asphyxiation’s Lullaby’ begins in a similar vein with plenty of flamboyant lead work, before a marked change of tack thanks to a big melodic chorus, accented by soaring clean vocals. There are big parallels with Soilwork before the track then plunges headlong into more brazen, warp-speed black metal territory. Ever present are the expressive and complex lead breaks, which inject a certain amount of intensity and certainly bring a smile to my face as someone who has a definite soft spot for such frivolities.

I’m hard pressed to identify any composition where the quality takes a dip or where my attention threatens to wane – there’s simply too much going on to enable me to tear my ears away. Be it the thunderous brutality of ‘Through These Darkened Halls’ with its atmospheric synths and In Flames-esque melodies or the groovy stomp and epic clean-sung anthemic chorus of ‘Apeiron I – The Legacy’, Dummer is full of different ideas and clearly adept at bringing them to life.

Naturally, with so many guest artists, it is arguably much easier for Dummer to experiment. However, rather than end up sounding disjointed or lacking direction, ‘The Ichor Carcinoma’ actually remains impressively focused and fluent, almost revelling in the fact that just about anything is possible on this record.

The Soilwork similarities rear up again within ‘Apeiron II – Global Dreamer’ but then, just as prominent are the In Flames influences within the cheeky melodic choruses early on. In contrast, ‘Unscrupulous’ is draped in a synth-laden atmospheric black metal cloak, certainly at the outset and at various points before chunky riffs and Dummer’s deep growl take over to bulldoze the listener into submission. And whilst the basic framework remains much the same, the eight-minute closer, ‘SuperSpell’ is afforded that little bit more time and space to dabble with a few more progressive-sounding ideas to compelling effect.

The more I listen to ‘The Ichor Carcinoma’, the more it sinks its teeth into me. The melodies become ever more pronounced within the heavy and technical soundscape, to the point where each song has something to hook the listener and demand further spins. Ultimately, I feel compelled to return to my previous comment and re-state that Buried Realm have provided me with my favourite melodic death metal album of 2017. For a debut album, that’s an impressive feat. For a debut from a one-man band, this feat borders on the astounding.

The Score Of Much Metal: 9

If you’ve enjoyed this review, you can check out my others from previous years and for 2017 right here: