Cryptex – Once Upon A Time – Album Review

Album Title: Once Upon A Time

If you didn’t know that you had clicked on a review of a progressive music album, you do now. The quote above is how Cryptex describe the music on ‘Once Upon A Time’, their third release and first for the SPV/Steamhammer label. The quote is suitably verbose, unnecessarily complicated, and of almost no help whatsoever in describing their musical offering. I hope the next few paragraphs will help to shed some more light on this record. We shall see…

German trio Cryptex formed in 2011 and have released two critically-acclaimed albums until this point, neither of which I have heard I’m ashamed to say. On ‘Once Upon A Time’, the core trio of vocalist/keyboardist Simon Moskon, guitarist André Jean Henri Mertens, and bassist Marc Andrejkovits remains present and correct, although they have been joined by Simon Schröder who provides the drumming for the album.

Being yet another brand new discovery for me, I am absolutely delighted to be able to report good things about Cryptex and ‘Once Upon A Time’. The very first thing to mention, is their originality, as I have wracked my brains but still can’t think of another band that sounds quite like this, even though they never stray too far into ‘bonkers’ or avant-garde territory. Nevertheless, there’s a quirkiness to Cryptex that draws me like a moth to a flame. Cryptex blend both modern and ‘classic’ progressive rock with a heaviness and a definite darkness borrowed from the metal world. But they also manage to weave in mainstream pop/rock melodies and hooks, as well as flirting with something close to show tunes material, the kind of theatrical music you’d perhaps hear in the West End or Broadway. If this sounds intriguing, feel free to read on.

Reference points are difficult and, to a greater extent pointless, but that being said, I do hear occasional nods to the likes of Swedish art-rock band A.C.T, when Cryptex dabble with those quirkier ideas, not to mention in the vocal department too; both bands place great emphasis on storytelling and layers of vocals. And, whilst the two bands sound poles apart in many ways, the spirit of Cryptex is not dissimilar to that of Fair To Midland, in that both feel slightly irreverent, but manage to captivate me in spite of this. Or maybe it’s because of this that I’m captivated? 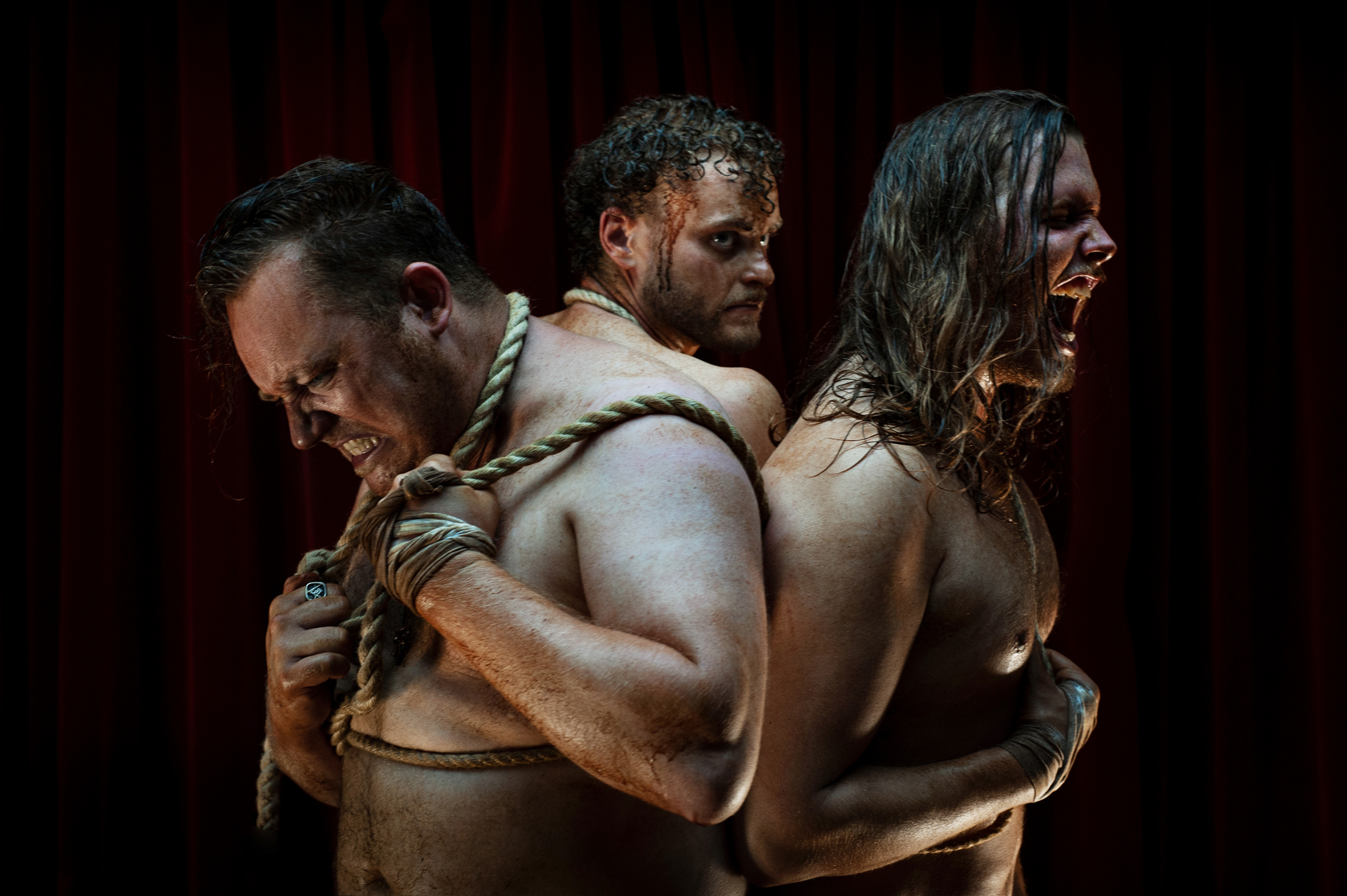 Either way, I find myself more and more enamoured with Cryptex with every passing spin. The opening song, ‘Once Upon A Time’ is a bona-fide anthem that demonstrates that these four Germans mean business right from the outset. It opens with a disarmingly beautiful classical music melody, before the intensity grows to unfurl into a wall of glorious sound, where rich guitar riffs from André Jean Henri Mertens blend with huge synth sounds to great effect. This is quickly replaced by a bouncy verse where Simon Moskon takes centre stage with his voice. The chorus is incredible, featuring that original wall of sound but enhanced by vocals from Moskon and layers of choral voices, all coming together to create the most dramatic and engrossing piece of music.

Next up is ‘Because The Reason Is You’, which features a ludicrously catchy chorus. It features yet more layers of vocals and instantly gets lodged in my head. But at the same time, the track is shrouded in a sinister cloak that juxtaposes the initial up-beat and apparently breezy tempo of the song. The quality production afforded to ‘Once Upon A Time’ comes across within a song that benefits from a dextrous bass performance courtesy of Marc Andrejkovits, a stunning and emotional lead guitar solo and winning performances from every corner of the band quite honestly.

The metal credentials of Cryptex come to the fore within the atmospheric and brooding ‘Bloodmoon’, principally via an injection of sharp, jagged riffs and particularly muscular drumming from Simon Schröder. But as you might expect, the composition is multi-faceted, refusing to sit still for too long. It means that there are moments of relative calm in between the confrontational guitars, as well as plenty of melodic interplay.

I’m reminded a little of another German band or two at this juncture, as ‘Body Language’ kicks in. The slightly accented vocals and bold guitar tones within the surprisingly bruising chorus are vaguely reminiscent to progressive band Everon, another positive in my book in case you were wondering. It even features a bizarre spoken-word section which I can’t help but enjoy in spite of how daft it initially sounds.

And would you believe it? Even the appearance of a damn saxophone within ‘Two Horned Crown’ doesn’t dampen my ardour for this excellent track. The opening melodies are sublime and I hate to admit it, but the dreaded brass instrument fits perfectly. Again, the song is pretty heavy in a ‘wall of sound’ kind of way, with drama and theatrics oozing out of every pore,

‘Haunted’ introduces a female voice to compliment Moskon for the first and only time on the record and ends with a killer, head-bang-worthy riff of epic proportions. I also love the guitar lines and another amazing lead solo within ‘Reptiles’, the longest and most overtly symphonic track on the album. The twists and turns are incredible, especially considering how smoothly the whole thing comes together. It demonstrates and underlines in triplicate, should it be necessary at this juncture, just how talented these musicians really are.

The opening to ‘I Don’t Know Why’ is where the West End Musicals side of Cryptex looms large, but they mix it up with some synth sounds from 70s and 80s classic pastoral progressive rock. It should be the song that I hate, but somehow I don’t. In direct contrast, ‘The Promise Keeper’ blasts from the speakers with an energy and swagger that’s normally the preserve of the melodic hard rock genre, before delivering possibly my favourite chorus on the album. Again, those darker undertones are present, but that’s nothing compared to the final three songs.

‘I See It In Your Eyes’ is primarily a piano and vocal track, but the emotion that comes through the lyrics and the melodies is impossible to ignore. ‘A M(o)urning’ is a 90-second synth-led piece that carries with it vast swathes of sadness and, ultimately, anger. I’m usually lame at deciphering band lyrics but I get the feeling that ‘Once Upon A Time’ is, deep down, about two people in a relationship that ultimately fails and the feelings that emerge as a result of such a difficult, tumultuous time. This is most obvious within the final track, ‘Leaving’. It is a spoken-word diatribe set to a moody piano-led soundtrack. It is dramatic and poignant, and as much as I normally dislike these kinds of songs, there is something about it that pulls me in. It builds, to a point where the listener is confronted with another wall of sound that evaporates to nothing in the blink of an eye. And in that moment, you’re left wondering ‘what have I just experienced’, before the compulsion to play it again strikes without warning.

I kid you not, this is an album that has to be heard to be believed. I may have inadvertently delivered a track-by-track precis of ‘Once Upon A Time’ but I urge you to listen to it for yourself and make up your own mind. For me, it has to be one of the very best surprises of the year so far, one that I think will find favour with anyone with a penchant for highly original and incredibly intelligent progressive music. Now if you’ll excuse me, I have some pre-ordering to do.