Dawn Of Ouroboros – The Art Of Morphology – Album Review

Album Title: The Art of Morphology

I love it when an album makes me scratch my head and wonder how on earth I am going to review it. I revel in the challenge, especially when it is an album that I genuinely like and therefore want to give my all to the review. Enter Dawn Of Ouroboros and their debut release, ‘The Art Of Morphology’.

Let’s start with the album title, ‘The Art Of Morphology’. According to the dictionary, ‘morphology’ means ‘the study of the form of things’. It is an apt title because this American band that only came into being a couple of years ago is, to my mind, exactly this: a study of the form of music, turning it into their own artistic vision. These guys have taken the extreme metal rulebook and thrown it away to a certain extent. Had they been slaves to convention, they’d be a thrash band, or similar because that’s the more prevalent Bay Area model. Instead, they have gone in a completely new direction, studied a number of styles of music and created their own interpretation of what extreme metal can sound like. And the result is incredibly interesting to say the very least.

At its most basic, Dawn Of Ouroboros could be referred to as a progressive black metal band. However, to label them as such would be to massively oversimplify things. There is a lot more going on within the music to cease the definition there. From shoegaze, to ambient, to death metal and black metal, this is an album that sounds like no other; sure there are reference points throughout, from Alcest to Wolves In The Throne Room, but ultimately, ‘The Art Of Morphology’ sounds positively fresh and intriguing. And crucially, there are proper songs to be heard too, ones that bring me back for repeated listens.

In many ways, the fact that this album is only around the 42-minute length and spread across just eight songs, is a big strength. Had it been longer, it may have presented too daunting a prospect for many. As it is, I am able to listen frequently without any fatigue and can actually focus on the music and the complexities within.

The difference between the first two songs alone is incredible. The album begins with ‘Revivified Spirits’ and the atmospheric sound of pouring rain, accented by simple clean guitar notes, subtle percussion and a gentle increase in sounds and textures over a two-minute intro. Whispered female vocals increase the shoegaze feel, albeit with a sinister edge as you sense the tension rising. A lead guitar line from founder/guitarist Tony Thomas (Sentient Ignition, Botanist) dominates before the song explodes in a flurry of breakneck drumming, deep caustic growls and fast, sharp black metal riffing. Initially, you can barely hear the wood for the trees but the mists soon clear to reveal a sophisticated and surprisingly melodic undertone to the extreme metal around it. The song then ends as it began, with the surprisingly soothing sound of falling rain and the hoot of an owl. 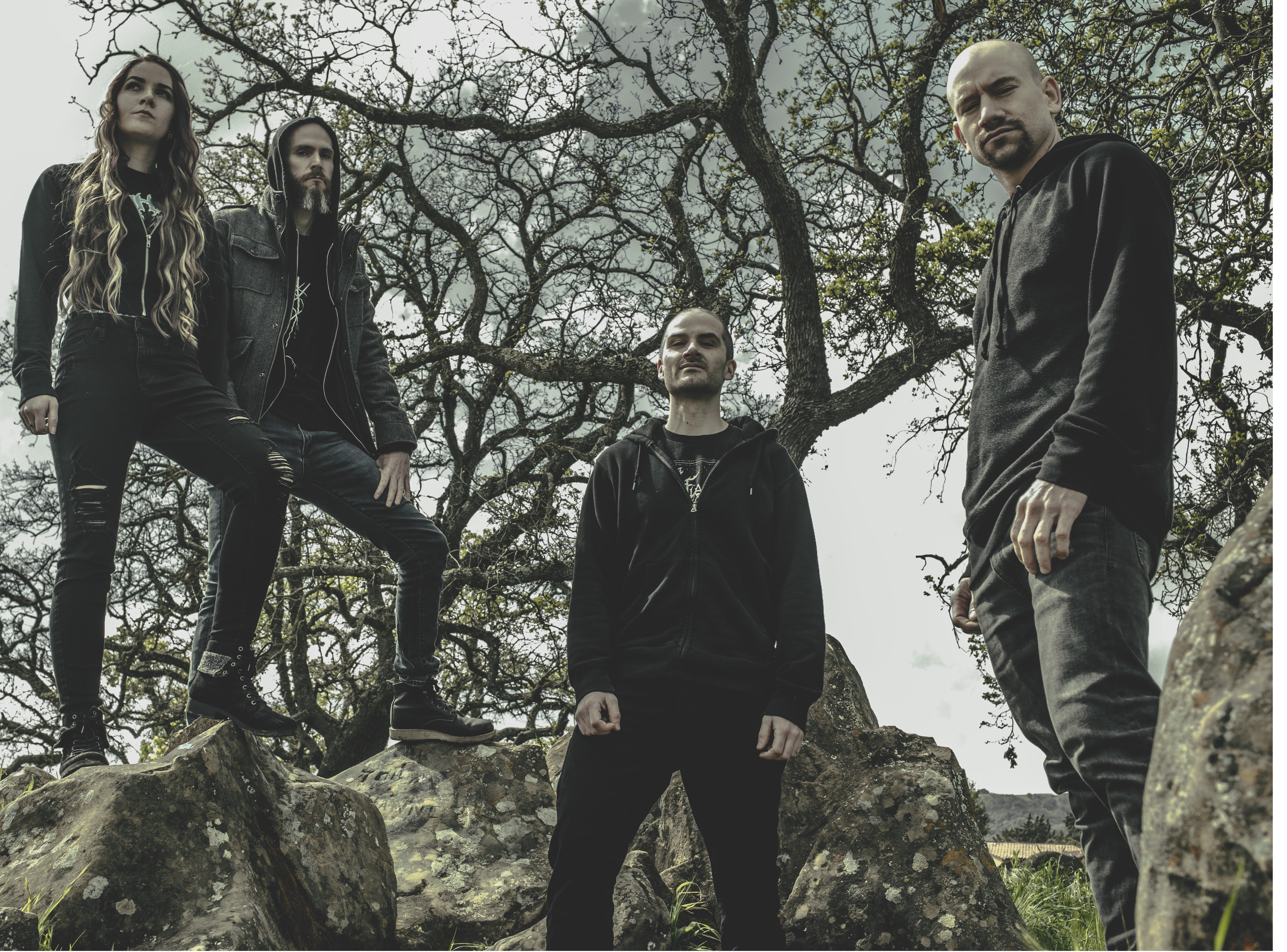 More beautiful, clean picked guitar notes and strummed chords ushers in ‘Pinnacle Induced Vertigo’. The guitars are quickly joined by some vibrant bass work by David Scanlon (Deliria, Melek Taus) and a cheeky drum beat courtesy of Ron Bertrand (Sentient Ignition, Botanist), only to be replaced by a monstrous chugging riff in the vein of a slower Amon Amarth track than destroys everything in its path, particularly my neck muscles. All of a sudden, the heaviness drops away, to be replaced by the shoegaze melodies from the intro topped off by the rich and vibrant clean vocals of Chelsea Murphy, which have a strangely pop-like feel to them. The riff returns but it doesn’t feel as heavy when accented by lead guitar flamboyance and more by way of clean guitar subtlety. The clever and impressively smooth juxtaposition between heavy and soft is extremely powerful, whilst the spoken-word aspect is a welcome, yet unexpected addition.

‘Gateway To Tenebrosity’ is a palette cleanser, a short piano piece that reprises the melodies within the preceding track to nice effect. It segues into ‘Lunar Cathexis’ effortlessly and beautifully, signalling what has to be my favourite section of the entire album. The ambient intro has a soothing lullaby quality to it before once again building with intelligence and purpose, ultimately unfurling into another steamroller-heavy riff with undeniable groove. But this time, the black metal DNA shines through a little more strongly, via the chosen guitar work, particularly in the second half. In addition, the contrasts between fast, tremolo riffs and bold, synth-led dreamlike sections where Murphy again takes centre stage are inspired, creating a striking composition, the likes of which I can’t recall hearing before.

To my mind, the album seems to get more overtly melodic and mesmerising as it goes along, with ‘Spiral Of Hypnotism’ being the next example, a track that has utterly floored me I must admit. Not only does it underline what a great, modern production this record boasts, but it is a stunning track in its own right. After the briefest of calm intros, it attacks with the venom of classic black metal before veering into eerie horror movie soundtrack territory. The extreme metal that emerges is synth heavy, melodic, and epic in scope, with layers of sounds all blending together seamlessly, eventually descending into glorious Alcest-ish blackgaze soundscapes, topped off by yet more delicious clean singing from Murphy. And then, unexpectedly, we’re hit with an incredibly bold synth melody that swamps everything but gloriously so. All that is, except the thunderous and impossibly superhuman-fast blastbeat drumming. The lead guitar-led melody that emerges is uplifting and spinetingling in equal measure.

There’s a hint or two of Dimmu Borgir within ‘Serpent’s Charm’, given that the slower-paced black metal here is synth heavy, dramatic and rather majestic, accented by a mischievous tinkling piano melody. The chunky death metal riffs make a return as the song develops, but it is at the halfway mark that my jaw hits the floor once again. The music is gorgeous and almost ethereal, dominated by the soft and effect-laden soothing vocals from Murphy, that duet with the growled approach whilst being underpinned by more uncompromising drumming.

‘Sorrow’s Eclipse’ is the longest single track on ‘The Art Of Morphology’ but it doesn’t feel like it. In fact, such is the quality throughout this record, no song feels overly long or bloated. It’s another key strength to this talented young band. It may be nearly nine minutes in length, but it whizzes past in a blaze of competing soundscapes that are pulled together with aplomb. At its heaviest, blastbeats, scything black metal riffs and tortured growls all compete for the listener’s attention. But, at the flick of a switch, we get rich enveloping melodies, sensitivity, warmth, irresistible textures and a myriad of other features, including some of the best and most pronounced bass work from Scanlon anywhere on the album.

Final, concluding track, ‘Valiant Abscond’ is an instrumental affair that is perhaps the most straightforward of all the songs on ‘The Art of Morphology’. That said, it introduces some rather eclectic synth sounds to emerge alongside the rousing and immediate melodies that sit at the heart of this triumphant concluding composition.

Some bands plug away for a lifetime trying to achieve something fresh and exciting, with many of them ultimately failing in their quest. Within two years of their formation, Dawn Of Ouroboros have, in my opinion, achieved it. And with their debut too. ‘The Art Of Morphology’ is an album that genuinely has its own identity; it blends extreme metal, with progressive complexity and strong melodic sensibilities, with a sense of smooth effortlessness. For a band so young, it’s an impressive feat. But even more exciting, is the thought of what they might come up with next. Adding this album to your collection is a no-brainer.