If there was a time to go back to a band and try again, it’s now, when time is in great supply and I have a mind more open than at any time previously. Despite being around for two decades, I have never understood the love for Ensiferum. Mind you, it’s more to do with the music they play than their ability or talent to be honest. I’ve never been a fan of folk metal in general because I tend to find that the melodies aren’t to my taste and I find the music to be a little light on substance and variety in the offering.

In the case of Ensiferum, theirs is more of a blend of folk metal and something approaching melodic death metal, thanks to the heavy guitars and growled vocals that are shared with a clean delivery as well. I have listened to ‘Thalassic’ several times through now and I will admit that with each listen, I find the music a little more enjoyable and palatable. Whilst I’d not declare all-out love for the music, I have found that I like it more than I was expecting. There are bits that I’m still not so keen on and at times, I find my mind wandering a little as I lose interest and focus. But, having expected to listen a couple of times before discarding the notion of a review, here I am, sufficiently inspired to be able to put pen to paper so to speak.

Getting the negatives out of the way first, ‘Misdsummer Magic’ has to be right up there as one of the album’s low points. It’s the kind of up-tempo, bawdy, violin-heavy shindig of a song that will go down a storm with those who want to have a bit of a dance at the summer festivals. However, I just don’t like it and where songs of this nature are concerned, I don’t think I ever will if I’m honest.

I’m also unconvinced with a fair few of the chosen melodies. Some of them fail to resonate with me in the way that I want them to, leaving me frustrated and a little bored. For example, I’m left cold by the likes of ‘The Defence Of The Sampo’ which deviates into Spaghetti Western territory at one point. It’s a shame because the remainder of the song, especially the huge ending, is pretty decent.

But having dealt with my misgivings, I now want to focus on the positives. Straight off the bat, the epic orchestral and cinematic instrumental opener ‘Seafarer’s Dream’ is a rousing way to begin, setting the tone for the album ahead in gloriously symphonic technicolour. I’m not normally a big fan of these intro pieces but this is done incredibly well. 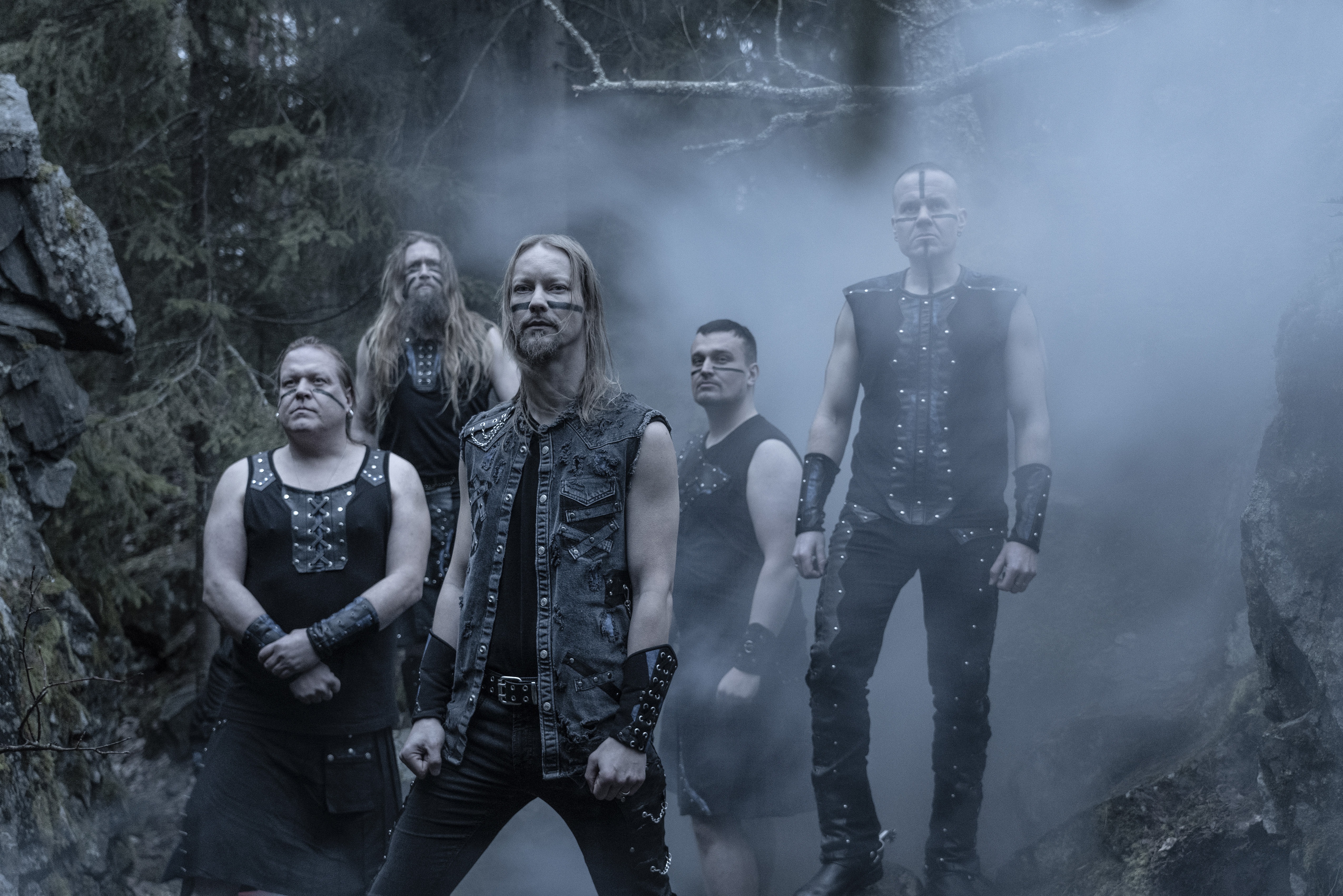 The contrast between the opener and the immediate follow-up, ‘Rum, Women, Victory’ is stark, but in a good way. The track literally thunders out of the speakers, starting with a cool riff before increasing the pace to breakneck speed, led by brisk folk melodies. The drumming of Janne Parviainen is incessant, whilst the keys of apparent newcomer Pekka Montin literally drench the track, helping to provide atmosphere as well as bolder, more flamboyant embellishments. The gruff vocals of Petri Lindroos are nothing overly remarkable but when coupled with Montin’s clean delivery, they create a super double-act.

The pace is slowed a little for ‘Andromeda’ and as I listen to this more stomping number, I am reminded a little of compatriots Amorphis, especially when Montin takes over at the microphone, initially within the chorus. The melodies on this track are strong and they get under your skin after a few concerted spins, meaning that this is a highlight for me.
I also like ‘For Sirens’, another composition that has more than a passing resemblance to Amorphis thanks to the chosen melodies from the outset. The keys are extremely prominent in what is another slightly slower number after the blitz that is ‘Run From The Crushing Tide’. I think I actually prefer it when Ensiferum take their foot off the gas a little, given that the majority of this album’s highlights occur for me when the music is slightly more sedate in pace. On this occasion, ‘For Sirens’ is blessed with one of the strongest choruses on the record, as well as some wonderfully stomping riffs.

‘One With The Sea’ is a pretty decent quasi-ballad that builds in intensity throughout, but I want to end the review by mentioning the epic closer (unless you get the version with the two bonus tracks), ‘Cold Northland (Väinämöinen Part III)’. The symphonics are dialled up to eleven on this near nine-minute composition, a composition that encapsulates the power and grandiosity of the album’s concept and which plays to the strengths of the band expertly. At times, it is all-out symphonic metal, the next, we’re thrust through a vortex into pure melodic death metal territory, with even a hint of black metal-esque drumming and riffing.

I may not ever come around to this kind of music fully, and it may never be my ‘go to’ genre of choice. However, having finally given Ensiferum a fair crack of the whip, I have grown to like ‘Thalassic’ more and more as time has gone on. There are some great songs on the album, some impressive musicianship and a taste for the theatrical. Long-term fans are likely to lap this record up and for me, I have no choice but to say that Ensiferum have earned my full respect.