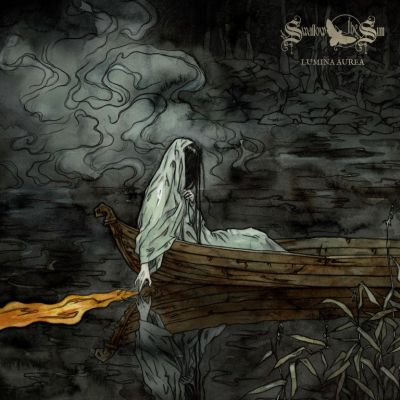 Ok, it’s soapbox time again. I don’t take any pleasure in this, but I feel that something has to be said.

This new EP for Swallow The Sun is only going to be made available, initially at least, on vinyl. I fully appreciate the revival of vinyl and had I not been born right in the middle of the vinyl near-extinction, it is highly likely that my collection would be predominantly in record form. Fortunately or unfortunately, I got into music as CDs became all the rage. I therefore have a CD collection that numbers in the thousands. And I don’t own a record player. Yet.

My choice therefore, is to either go without or buy something I can’t play. I also fully appreciate that labels can release music on whatever format they wish. However, when the press material actually confirms that this EP links to the forthcoming album, an album that’ll be available on CD, it seems unfathomable to me that you can’t listen to both releases in the same format.

But with my personal gripe out of the way, let’s get on to what you all clicked the link for: a critique of the content of this release. ‘Lumina Aurea’ is its title and it precedes the full album, ‘When A Shadow Is Forced Into The Light’ by around a month. It is comprised of either one or two tracks depending on your point of view, because the second track is an instrumental version of the first. Identical except for a lack of vocals.

However, long term STS fans will know that the Finnish purveyors of ‘gloom, beauty and despair’ are masters of the epic, of conjuring up images in the mind of the listener and enveloping them in layer upon layer of rich atmosphere. And the same is very true of ‘Lumina Aurea’.

The first thing to comment upon with this near 14-minute composition is its sheer suffocating darkness. It is like listening to a lament conjured up from the pits of ultimate darkness and despair from which there is no escape and indeed, no hope of being set free. It may also seem an odd thing to say but those of you familiar with STS’s usual output will perhaps not immediately recognize this as a STS composition. There are precious few forays into extreme metal territory where crushing instrumentation joins forces with the subterranean growls and screams of Mikko Kotamaki.

Instead, ‘Lumina Aurea’ is a slow-burning epic that uses the occasional heavy guitar tone as an embellishment only, a thunderous and ominous portent of doom that comes out of nowhere to send an icy shiver down your back. As you may have guessed, the band prefer here to unsettle the listener with more subtle forms of heaviness and oppression. The drums, when they appear, are only used to keep a ponderous and metronomic beat, almost glacial in pace.

The demonic raspy vocals are nasty, but they again supplement the generally minimalist soundscape, one that features the talents of guest musicians Einar Selvik (Wardruna) and Marco I (The Foreshadowing). Then there are the spoken-word lyrics sung primarily in what I suspect is Latin as well as the incredibly emotive Gregorian chanting, which in the context of this piece is truly sinister-sounding.

Having also heard the full-length album, I can confirm that ‘Lumina Aurea’ sounds markedly different from that material. However, there is something about this composition that draws me in. Like a gruesome horror or a chilling thriller, this song has that evil aspect that is seductive and compelling. It may be a minimalist and dystopian track, the soundtrack to your nightmares, but it is wonderful exactly because of that.

On balance, I do prefer the material within the full-length album because it is more in keeping with Swallow The Sun’s core sound, featuring more in the way of melody and I’ll bring a review of that in due course. But this EP, regardless of it consisting of just one track repeated twice, is a fascinating listen and one that many of you will enjoy, of that I have no doubt.

The Score of Much Metal: 7

If you’ve enjoyed this review, you can check out my others from 2018 and from previous years right here: