This is my last post in this mini series, taking a loom at those live releases that have had the most significant impact upon me during 2013.

If you’re interested, the previous two posts can be viewed here:
Number 3
Number 2

In addition, if you missed my Album of the Year 2013 countdown, where I look at my favourite studio albums, that can be accessed here.

in the meantime, on to the main topic of conversation today, namely my favourite live release from 2013. And the winner is:

For the second year in a row, an Anathema release sits at the top of a ‘best of’ list. In 2012, the Liverpudlians released the utterly perfect ‘Weather Systems’ and this featured at the top of my Top 20 for 2012. And now, we have the equally stunning ‘Universal’.

Offered to fans as a four disc combined audio-visual package, ‘Universal’ captures the awe-inspiring one-off show that took place in September 2012 at the ancient Roman theatre at Philipoppolis, Bulgaria. Not only is the outdoor amphitheatre setting spectacular, those lucky enough to attend the show, also had the pleasure of seeing the Plovdiv Philharmonic Orchestra join Anathema on the stage.

The first time that I watched the DVD, I was literally blown away. Events in my life over recent years have turned me into quite an emotional sort if the mood takes me, and within seconds of the band hitting the stage and breaking into “Untouchable, Part 1”, the opening track from the aforementioned ‘Weather Systems’, by body was awash with goosebumps and my skin tingled from head to toe. And, before I knew it, silent tears ran down my cheeks, as I was completely overcome by what I was watching.

Does this sound a little bit over-the-top, slightly melodramatic, too full of hyperbole? Maybe you’re right, but I’m only writing the absolute truth. Only a handful of bands have this effect on me, but Anathema are one. Their music is so beautiful, so deep, so rich, vibrant and emotional.

Having calmed down and over the weeks, given ‘Universal’ more time to sink in, what strikes me is how absolutely spot-on everything is. From the rhythm section, through to the melodic leads, the acoustic guitar picking and to the vocals themselves, to these ears, the music is delivered flawlessly. In a day and age where pop ‘stars’ sing out of tune live on TV and yet still receive standing ovations from tone-deaf judges, it delights me to know that there is so much genuine talent in the genres of music that I listen to.

The show has been filmed by renowned film maker Lasse Hoile and his deft touch can be seen all over this release. The whole thing is brought to the living room with clarity and professionalism but without losing any of that magic that must have been zipping around the Roman arena that September night in 2012.

The set-list itself is also fantastic. Naturally, coming so hard on the heels of ‘Weather Systems’, the bulk of the material is culled from this masterpiece. That’s fine by me, but there’s also room for some other Anathema classics in the shape of “A Simple Mistake” and “Deep” to name but two. The show also features a half-hour encore where the orhhestra are absent and it’s just the Anathema boys rocking out as only they know how. There’s room for another tear-jerker (and personal favourite) in the form of “Internal Landscapes”) as well as a full-on, more hardcore version of “Fragile Dreams”. ‘This is the version of “Fragile Dreams” that you want to hear’, quips Vincent Cavanagh, in a parting ‘goodbye’ of sorts. 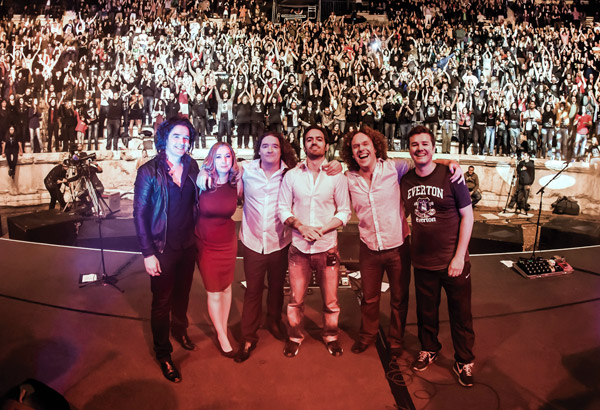 As the end draws near, each and every time I watch this show, I feel sad. I want to watch it again, I want to be transported back in time so that I could get to see the show live, actually in the arena. Sadly I can’t, so I have to make do with the DVD. Thank the Gods that the whole package is just about perfect then!