Progpower Europe – the greatest festival ever?

The 2012 edition of Progpower Europe is right around the corner but, as a brand new Dad, I cannot attend for the third year in a row. I’m disappointed, but the adventure I have embarked upon at home makes up for the disappointment no end. Nevertheless, I shall not be travelling to Baarlo in the Netherlands on 6th October and I will miss it intensely.

‘But it’s just another festival, Matt’, I can hear you say. Of course it is, but as I have discovered and experienced over the last two years, it is so much more than just a music festival. Hopefully this blog will delve into that and explain what I mean.

On a normal, random trawl of the Internet in 2010, I heard the news that I had wanted to hear for many years, but feared would never come to pass – Shadow Gallery live on stage. Well, that was it. I had no choice. I had to go to the European edition of Progpower in the Netherlands to see one of the rarest events in music. In fact, their appearance would be only the second time the Americans had taken to the stage in their history. It didn’t matter that I could not find a travelling companion, I had to go. I sent an email to the organiser, Rene, and within a week or so, I had my flights and accommodation sorted. I was off.

After a journey that included a car, a plane, two buses and plenty of walking, I arrived at the Kasteel De Berckt way ahead of check-in time. I sat in the courtyard of the impressive hostel and awaited the other festival-goers that I had been promised via the website. It didn’t take long and soon the place was awash with fellow metal heads renewing acquaintances with much good humour. I initially felt a little on the fringe of things but was invited to partake in the annual opening night tradition: a Chinese buffet at a restaurant near to the venue. 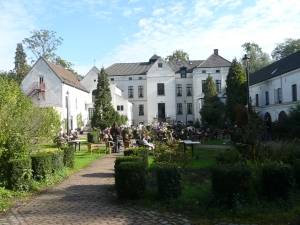 The walk to the town from the Castle was a good twenty minutes along country lanes surrounded by gardens and farmland and, in that time, got to know one of my new roommates – Francesco from Italy. We talked the whole way and an immediate friendship was formed. When we arrived at the restaurant, we sat down at a table together with a group of strangers. The ‘strangers’ turned out to include Lene, Kim (later nicknamed Tissues as most bands brought him to tears at least once during their performance!), Havar and Lars from Norway, all attending their first Progpower as well. Guess what? Yup, friendships were formed almost immediately with these lovely Scandinavians. In fact, in the years since, Lene and Kim have been guests to my home in the UK as we all attended a Haken gig together.

The venue, the JC Sjiwa, was a pleasant surprise. A small courtyard stood at the front of the building complete with a BBQ and benches under an awning in case of early autumn inclement weather. Inside, the venue had a capacity of a few hundred only, meaning that it was an intimate experience as well as maintaining a warm atmosphere.

I don’t wish to dwell too much on the music itself as I don’t want this blog to become a live review (plus I already wrote a review for Powerplay Magazine in the UK). Needless to say that Shadow Gallery were amazing. Some attendees complained that the sound quality was poor but where I was it was ok and I loved the performance. It stands as one of the most special music-related nights of my life. The likes of Haken, Leprous and Serenity, not to mention the clockwork-like organisation, also made the weekend a massive triumph musically.

What made the whole festival so special though was the friendliness and inclusiveness of everyone in attendance, from the bands, to the organisers and from the fans to the people that worked at the venue. After the live music stopped, the partying began at the rock bar below the venue. Never have I seen so many grown men and women singing along to rock and metal classics and even thrusting their groins at the walls during the song ‘Balls To the Wall’! The partying was not confined to the festival goers either, as some of the bands were eager to get involved, including Myrath and Redemption to name just a couple.

Partying with Nick from Redemption!

The following year, I had to return. Not only was the line-up great again, with Symphony X, Seventh Wonder and Redemption all in attendance, but I wanted to meet up with everyone again, many of whom I counted as friends.

Within an hour of my arrival at the Castle, the beer was flowing, the laughter was loud and it felt like I’d never been away. Once again the music was great, the weather was sensational and the partying, including paddling-pool hijinks, was even more fun than the year before.

It isn’t hard to point to moments during the two festivals that stand out for me. The difficulty is keeping these to a manageable number as there were so many. But, if you will indulge me, here are a select few:

Interviewing Shadow Gallery’s Gary Wehrkamp and Darkwater’s Henrik Båth at the Castle prior to their respective performances was a real highlight, as was chatting with Shadow Gallery post-show at the hastily-arranged signing session. Having breakfast with the band the following morning was surreal but very cool. Interviewing Haken in their spacious and luxurious ‘tour bus’ was a blast and the results can be read here.

Henrik of Darkwater and I

Then there was the impromptu concert in the courtyard of the Castle that brought two disparate sets of music fans together. A brass band was obviously staying at the hostel at the same time and, on the Sunday, played some songs in the bright sunshine. The metal heads threw the horns and growled their approval and, buoyed on by the unusual yet warm reception they received, the band played on, even joining in with the metal salute towards the end. It was great fun and really summed up the jovial and friendly atmosphere throughout.

Listening to new albums by different prog metal bands in the café at the Castle after breakfast was enjoyable too. The thanks for this has to go to Mattias Norén – oh, didn’t I mention that the artist responsible for the front cover of my favourite album of all time, Evergrey’s ‘In Search Of Truth’, was present too? Sorry! Hearing Andromeda and Darkwater albums before their release at high volume in such grand surroundings was really cool, as was hearing ‘Visions’ by Haken. Realising, mid listen that I’d been thanked personally by the band in their liner notes made the experience that little bit more special.

Missing my flight home at the end of the 2010 festival was a bit of a low-point, as was losing my mobile phone and getting wet clothes thanks to an over-zealous shower in my room in 2011. But, when balanced out by all the amazing experiences over the two years, these hiccups did not matter at all.

However, what has really cemented my love and respect for this festival and those that attend began with tragedy. After a great three days, the party was winding down when tragically, Mikko Laine from Sole Remedy lost his life due to a freak accident outside the venue. It brought the whole festival to its knees initially but, within minutes, everyone was rallying around trying to help and comfort Mikko’s band mates and those unfortunate enough to witness the event. As one of those people, I was bowled over by the genuine love and affection that was shown to me from everyone, from those that I was already close to and others who, until then, I had yet to really converse with to any great degree. Special mention has to go to Jonathan, Dario and Jana for their support that difficult evening, although on the eve of the 2012 festival, my thoughts are with all of my friends, the entire ‘Progpower Family’. To name everyone individually is impossible, but I’m sure you all know who you are.

I hope that this blog has revealed a bit more about why I consider Progpower Europe to be the best music festival in Europe, if not the world. Perhaps it will also inspire new friends to attend in the future and join this awesome family…